It could be said that the career of Canadian-born film director Allan Dwan (1885-1981) began at the dawn of the American motion picture industry. Originally a scriptwriter, Dwan became a director purely by accident. Even so, his creativity and problem-solving skills propelled him to the top of his profession. He achieved success with numerous silent film performers, most spectacularly with Douglas Fairbanks Sr. and Gloria Swanson, and later with such legendary stars as Shirley Temple and John Wayne. Though his star waned in the sound era, Dwan managed to survive through pluck and ingenuity. Considering himself better off without the fame he enjoyed during the silent era, he went on to do some of his best work for second-echelon studios (notably Republic Pictures’ Sands of Iwo Jima) and such independent producers as Edward Small. Along the way, Dwan also found personal happiness in an unconventional manner. Rich in detail with two columns of text in each of its nearly 400 pages, and with more than 150 photographs, this book presents a thorough examination of Allan Dwan and separates myth from truth in his life and films. 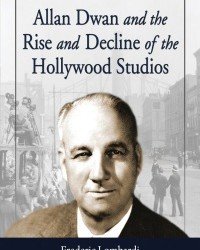