A comprehensive, contextual presentation of all aspects―social, political, and economic―of slavery in the United States, from the first colonization through Reconstruction.

• Over 100 contributors represent the finest scholarship worldwide on the topic

When I started working with ABC-CLIO in
1995 to develop The Historical Encyclopedia
of World Slavery (2 vols., 1997) I could never
have imagined the influence that the relationship
would have on my career and the long-lasting partnership
that would emerge. After receiving positive reviews
for that initial project, I was later able to produce
Chronology of World Slavery (1999) and The
Louisiana Purchase: A Historical and Geographical Encyclopedia
(2002) for ABC-CLIO, two other reference
works that were also well received.
From the moment that I began envisioning Slavery
in the United States: A Social, Political, and Historical
Encyclopedia it was clear that this was going to be a
massive undertaking but the necessity of the work
made it a worthy challenge. Three years in development,
the task certainly had its highs and lows as
looming deadlines created euphoria when met, but
more long nights and weekends when targets were
missed. In the process, the project taught me much
about dedication, focused determination, and humility—
lessons that I hope have made me a better editor
and a better person.
I appreciate the assistance of the professional staff of
ABC-CLIO for their patience and counsel during the
development of this project. It has been a pleasure to
work with Alicia Merritt and Steve Danver, senior acquisitions
editors, who have provided a wealth of guidance
from the moment this work began to its final
publication. In addition, Submissions Editors Peter
Westwik and Alex Mikaberidze have helped to polish
this work in countless ways.
The work of seventy-five scholars who have examined
the history of slavery appears in this work in the
form of 305 encyclopedia-style entries. Having worked
with many of these authors over the years, I have developed
an admiration for their work and am pleased
that they contributed their scholarship to this publishing
effort. I value the friendships that have formed in
the development of these volumes as many of these
colleagues have also extended their encouragement
and support to me.
Several of my students at Eureka College have
worked over the years as research assistants and have
helped me with developing portions of this manuscript.
I am appreciative of their assistance and wish to
express my sincere gratitude to them for their tremendous
efforts. Special thanks are extended to Sarah Wilson,
Jon Hackler, Lance Hrdlicka, Mitch Pinkston,
and Abbre McClain for their tireless dedication to this
work. In addition, I must thank all my students, past
and present, whose stimulating questions about slavery
have been a valuable resource in my own intellectual
growth as I have had to fashion and hone interpretations.
Their invariable quest to learn has challenged
me and sustained me through the years.
The Eureka College Faculty Development Committee
generously supported start-up costs for this
project and assisted in supporting research trips that
were necessary to collect materials for this work. In addition,
I must thank Joy Kinder, who has always offered
expert secretarial assistance as well as a kind word
when I was working intently to get mailings out on
time. Eldrick Smith always solved my computer problems,
both great and small, which kept me on task and
generally sane. In addition, the support of Ginny Mc-
Coy, Tony Glass, Kelly Fisher, Brent Etzel, Lynne
Rudasill, and Ann Shoemaker was especially helpful in
tracking down the bits and pieces that can make an editor’s
life challenging.
I take responsibility for the failings and inevitable
shortcomings of this work. Any attempt to examine
an issue as large and as perplexing as slavery in the
United States in an encyclopedia format will undoubtedly
require editorial choices that will not be pleasing
to everyone. The necessity of blending social history
with political history in a historical context is a challenging
task, but these volumes represent a genuine effort
to strive for the mean and fashion a viable synthesis.
It is hoped that students, scholars, and general
readers alike who use this work will find it to be informative
and insightful.
— Junius P. Rodriguez
June 20, 2006 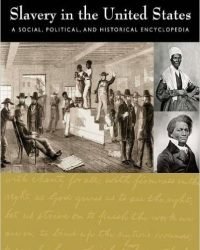