With the 13th edition of Wintrobe’s Clinical Hematology, this new edition once again bridges the gap between the clinical practice of hematology and the basic foundations of science.

Broken down into eight parts, this book provides readers with a comprehensive overview of: Laboratory Hematology, The Normal Hematologic System, Transfusion Medicine, Disorders of Red Cells, Hemostasis and Coagulation; Benign Disorders of Leukocytes, The Spleen and/or Immunoglobulins; Hematologic Malignancies, and Transplantation. Within these sections, there is a heavy focus on the morphological exam of the peripheral blood smear, bone marrow, lymph nodes, and other tissues.

With the knowledge about gene therapy and immunotherapy expanding, the book includes new, up-to-date information about the process and application of these therapies. Likewise, the editors have shed a completely new light on the process of stem cell transplantation in regards to both malignant and benign disorders, graft versus host disease, and the importance of long-term follow-up of transplantation survivors.

Welcome to the thirteenth edition of Wintrobe's Clinical Hematology. This textbook strives to continue the Wintrobe tradition of being comprehensive yet accessible to all who seek to understand the history, science, and clinical practice of hematology. We have brought together clinicians and scientists who have given their time and expertise to produce a state-of-the-art resource which includes an online presence with expanded bibliographies, appendices, and updates.
THE WINTROBE LEGACY
Few have appreciated the wealth of information to be gained by the study of blood more than Maxwell Myer Wintrobe (1906 to 1986). He cited poets, including John Donne's “pure and eloquent blood” and Goethe's “Blood is a juice of a very special kind”; but he added that “It is for the scientist that the blood has been especially eloquent.”1. It has been over 70 years since Wintrobe wrote the first edition of Clinical Hematology (1942); and at the time, he was uncertain if it would have much readership owing to the priorities of World War II. His objective was “to bring together the accumulated information in the field of hematology in a systematic and orderly form.” He felt the book should be “comprehensive, complete, and authoritative.” He emphasized the importance of “an accurate diagnosis as a prerequisite to efficacious treatment.” His goals were to link science to the clinical practice of hematology and to provide the best therapy possible for an individual patient. We have recruited an outstanding group of scientists and clinicians who have given their expertise and time to accomplish similar goals for the thirteenth edition of Wintrobe's Clinical Hematology.
Wintrobe's career included medical school at the University of Manitoba (1921 to 1925) and academic appointments at Tulane University (1927 to 1930), The Johns Hopkins University (1930 to 1943), and the University of Utah (1943 to 1986). His interests were broad and his contributions to medicine and hematology were many.2 He had access to an abundance of clinical material at Charity Hospital (New Orleans, LA), where he invented the hematocrit glass tube, which came to bear his name and allowed him to collect information about the blood (Figure 1). The Wintrobe hematocrit tube not only allowed determination of the volume of packed red blood cells after centrifugation but also allowed measurement of the erythrocyte sedimentation rate, determination of the volume of packed white cells and platelets, and detection of changes in the appearance of the plasma.
At Johns Hopkins University, Wintrobe made peripheral smears available to the clinic, reorganized the teaching of the third-year student laboratory course, and established himself as an investigator and leader in hematology.3 He and his colleagues showed that hypochromic anemia responded to iron,4 gave the first account of cryoglobulin in the blood,5 and provided the first evidence that thalassemias were inherited.6 He became chief of the Clinic for Nutritional, Gastrointestinal, and Hematologic Disorders in 1933 and was promoted to the position of Associate in Medicine in 1935. During World War II, he was assigned to study chemical warfare agents and his efforts led to a landmark paper with Louis Goodman et al. on the efficacy of nitrogen mustard as a chemotherapeutic agent 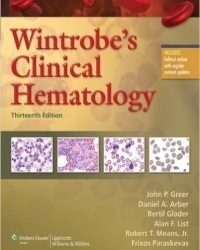