Philosophy has much to offer psychiatry, not least regarding ethical issues, but also issues regarding the mind, identity, values, and volition. This has become only more important as we have witnessed the growth and power of the pharmaceutical industry, accompanied by developments in the neurosciences. However, too few practising psychiatrists are familiar with the literature in this area.

The Oxford Handbook of Philosophy and Psychiatry offers the most comprehensive reference resource for this area ever published. It assembles challenging and insightful contributions from key philosophers and others to the interactive fields of philosophy and psychiatry. Each contributions is original, stimulating, thorough, and clearly and engagingly written — with no potentially significant philosophical stone left unturned. Broad in scope, the book includes coverage of several areas of philosophy, including philosophy of mind, science, and ethics.

For philosophers and psychiatrists, The Oxford Handbook of Philosophy and Psychiatry is a landmark publication in the field — one that will be of value to both students and researchers in this rapidly growing area.

“Madness,” the Oxford philosopher Anthony Quinton commented in a lecture to the
British Academy published in 1985, “is a subject that ought to interest philosophers; but
they have had surprisingly little to say about it.” What a diff erence three decades have
made! As the contributions to this book so richly illustrate, there is nowadays hardly a
psychiatric stone that philosophers have left unturned. Nor is the trade one-way. If philosophers
are now interested in psychiatric research and practice, so, too, are researchers
and practitioners—including an increasingly vocal and eff ective service user community—
interested in philosophy.
Th e Oxford Handbook of Philosophy and Psychiatry brings together what we hope is a representative
cross-section of the new fi eld. Like other Oxford Philosophy Handbooks, it is
written mainly by philosophers for philosophers. In this respect it balances other contributions
to the book series with which it is co-branded, the IPPP (International Perspectives
in Philosophy and Psychiatry) series: Th e Oxford Textbook of Philosophy and Psychiatry, for
example, is oriented more towards practice. Yet this Handbook, although primarily philosophical
in focus, incorporates a number of novel features refl ecting the lively dynamic
between theory and practice that is such a distinctive characteristic of the new fi eld. Th us a
number of our contributors are practitioners and empirical researchers as well as philosophers;
others write from fi rst-hand experience of mental disorder; and the book as a whole
is structured around the stages of the clinical encounter rather than within traditional philosophical
disciplines. Nor are the Handbook’s ambitions in this respect merely colligative. As
we describe more fully in our introductory Chapter 1, the Handbook is supported by a website
(www.oup.co.uk/companion/fulford) of narrative and other case-based materials off ering
what we hope will be a unique one-stop resource for philosophers entering the fi eld.
A project as complex and ambitious as Th e Oxford Handbook of Philosophy and Psychiatry
would have been impossible without the combined skills of many, and diversely talented,
people. Our thanks go fi rst to our contributors to both the book and the website: each and
every one has been wonderfully generous with their time and commitment in responding
to the editorial challenges of synthesis and integration across the book as a whole. Our
thanks go also to the members of our International Advisory Board who made many crucial
suggestions in the early stages of planning the book and have given continuing support
throughout. Our two graduate researchers, Will Davies and Gemma Copsey, showed great
skill and dedication and we are grateful to them for their crucial work respectively on an initial
literature review and on the development of the website. George Graham was ably supported
by Casey Landers. We are grateful also to David Crepaz-Keay, Jayasree Kalathil, Toby
Williamson, and others at the Mental Health Foundation, a voluntary sector organization
that in uniquely combining policy and service user perspectives has brought an important
additional dimension to the book and its supporting website. And all of us, fi nally, editors
and contributors alike, are grateful to the publishing team at Oxford University Press who
thanks go particularly to Martin Baum and Peter Momtchiloff whose collaboration as commissioning
editors respectively for psychiatry (and related areas) and philosophy made the
book possible; to Abigail Stanley and to Beth McAllister and their respective production
and marketing teams; and to Charlotte Green as project lead for her boundless energy and
for her consistently good humoured and problem-solving approach.
No single volume however compendious can hope to capture, still less keep up with, every
important development in this vigorously expanding fi eld. Th e IPPP series will continue to
publish cutting edge work. Future Oxford Handbooks in Philosophy will off er further stateof-
the-art collections: the forthcoming Oxford Handbook of Psychiatric Ethics was conceived
as a sister volume to this book; and there are clear gaps in the market for future Handbooks
covering the relationships between psychopathology and such areas as phenomenology and
the cognitive and neurosciences. But thirty years on from Quinton’s prescient lecture our
hope is that the publication of this book in what is the centenary of Karl Jaspers’ General
Psychopathology will help to secure the place of psychiatry as a subject that is and remains
permanently among the interests of philosophers 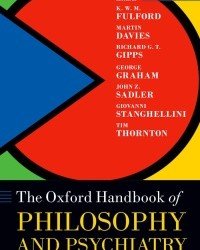