M. Mann — The Dark Side of Democracy

This comprehensive study of international ethnic cleansing provides in-depth coverage of its occurrences in Armenia, Nazi Germany, Cambodia, Yugoslavia, and Rwanda, as well as cases of lesser violence in early modern Europe and in contemporary India and Indonesia. After presenting a general theory of why serious conflict emerges and how it escalates into mass murder, Michael Mann offers suggestions on how to avoid such escalation in the future. Michael Mann is the author of Fascists (Cambridge, 2004) and The Sources of Social Power

Since my previous work had neglected the extremes of human behavior,
I had not thought much about good and evil. Like most people, I had tended
to keep them in entirely separate categories from each other as well as from
ordinary life. Having studied ethnic cleansing, I am now not so sure. Though
I am not attempting here to morally blur good and evil, in the real world
they are connected. Evil does not arrive from outside of our civilization,
from a separate realm we are tempted to call “primitive.” Evil is generated
by civilization itself.
Consider the words of three prominent historical figures.We tend to think
of President Thomas Jefferson as embodying Enlightened reason. Indeed, it
was in the name of the advance of civilization that he declared that the
“barbarities” of the native American Indians “justified extermination.” A
century later, President Theodore Roosevelt, a decent modern man, agreed,
saying of the Indians, “extermination was as ultimately beneficial as it was inevitable.”
Forty years on, a third leader said, “It is the curse of greatness that
it must step over dead bodies to create new life.” This was SS Chief Heinrich
Himmler, who is rightly considered as the personification of evil. Yet he and
his colleague Adolf Hitler said they were only following in the Americans’
footsteps. As I will argue here, murderous ethnic cleansing has been a central
problem of our civilization, our modernity, our conceptions of progress, and
our attempts to introduce democracy. It is our dark side. As we will see, perpetrators
of ethnic cleansing do not descend among us as a separate species
of evildoers. They are created by conflicts central to modernity that involve
unexpected escalations and frustrations during which individuals are forced
into a series of more particular moral choices. Some eventually choose paths
that they know will produce terrible results. We can denounce them, but
it is just as important to understand why they did it. And the rest of us (including
myself) can breathe a sigh of relief that we ourselves have not been
forced into such choices, for many of us would also fail them. The proposition
underlying this book is that murderous ethnic cleansing comes from our
civilization and from people, most of whom have been not unlike ourselves.
In trying to understand them, I owe debts to many. This is mainly a work of
secondary analysis, depending on the primary work of others. My research is at the dismal end of a terrible subject matter, focusing on perpetrators,
not on heroic resisters or even dignified victims. I can only admire many
of my sources – the fortitude of survivors who bore witness to the horrors
they experienced, the bystanders who carefully described what they saw,
those who contributed to independent reports and judicial courts of inquiry,
and those scholars who have dedicated their careers to comprehending what
happened.
I have received much stimulation over the last few years from the Sawyer
Seminars on Mass Violence held at the Center for Advanced Study in the
Behavioral Sciences in Palo Alto, California. My thanks go to Norman
Naimark, Ron Suny, Stephen Steadman, and Bob Zajonc, my co-organizers,
to Doug McAdam, the director of the Center, and to all the Seminar’s students
and visiting speakers. They have all contributed intellectually to this
book.
I owe a more particular debt to Hilmar Kaiser for inspiring me with his
brilliant yet passionate scholarship on the Armenian genocide. I also thank
Raymond K´evorkian for his kindness in giving me his major unpublished
manuscript and O¨ dul Bozkurt for her translations from the Turkish. For
help on the Nazi genocides I thank Ian Kershaw and Michael Burleigh for
authoritative research guidance, Christopher Browning and George Browder
for criticisms of an earlier manuscript, and Martin Tahany for German translations
and Peter Stamatov for Magyar translations. Mark Lupher provided
helpful criticisms of an earlier draft on Communist cleansings. Aleksandra
Milicevic often corrected my outsider’s ignorance of the Balkans, and I was
privileged to discuss with Scott Straus his remarkable research in Rwanda.
Patricia Ahmed helped me collect materials on India and Indonesia. I also
thank David Laitin for his vigorous and helpful criticisms of my central arguments,
though I fear my amendments will still not have satisfied him.
UCLA provided me with generous research funds and talented students
(I have named four of them here). As always, John Hall has given general
intellectual encouragement, while Nicky and Louise Hart and Gareth and
Laura Mann kept me sane amid such a disturbing research project. 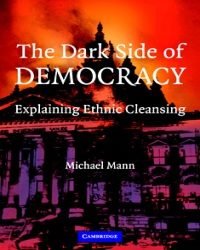