Acclaimed for its clear, friendly style, excellent illustrations, leading author team, and compelling theme of exploration, Neuroscience: Exploring the Brain, 4e takes a fresh, contemporary approach to the study of neuroscience, emphasizing the biological basis of behavior. The authors' passion for the dynamic field of neuroscience is evident on every page, engaging students and helping them master the material. In just a few years, the field of neuroscience has been transformed by exciting new technologies and an explosion of knowledge about the brain. The human genome has been sequenced, sophisticated new methods have been developed for genetic engineering, and new methods have been introduced to enable visualization and stimulation of specific types of nerve cells and connections in the brain. The new Fourth Edition has been fully updated to reflect these and other rapid advances in the field, while honoring its commitment to be student-friendly with striking new illustrations, additional animations, and an unparalleled array of online resources.

For over 30 years, we have taught a course called Neuroscience 1:
An Introduction to the Nervous System. “Neuro 1” has been remarkably
successful. At Brown University, where the course originated, approximately
one out of every four undergraduates takes it. For a few students,
this is the beginning of a career in neuroscience; for others, it is the only
science course they take in college.
The success of introductory neuroscience refl ects the fascination and
curiosity everyone has for how we sense, move, feel, and think. However,
the success of our course also derives from the way it is taught and what
is emphasized. First, there are no prerequisites, so the elements of biology,
chemistry, and physics required for understanding neuroscience are
covered as the course progresses. This approach ensures that no students
are left behind. Second, liberal use of commonsense metaphors, realworld
examples, humor, and anecdotes remind students that science is
interesting, approachable, exciting, and fun. Third, the course does not
survey all of neurobiology. Instead, the focus is on mammalian brains
and, whenever possible, the human brain. In this sense, the course closely
resembles what is taught to most beginning medical students. Similar
courses are now offered at many colleges and universities by psychology,
biology, and neuroscience departments.
The fi rst edition of Neuroscience: Exploring the Brain was written to
provide a suitable textbook for Neuro 1, incorporating the subject matter
and philosophy that made this course successful. Based on feedback from
our students and colleagues at other universities, we expanded the second
edition to include more topics in behavioral neuroscience and some new
features to help students understand the structure of the brain. In the
third edition, we shortened chapters when possible by emphasizing principles
more and details less and made the book even more user-friendly
by improving the layout and clarity of the illustrations. We must have
gotten it right because the book now ranks as one of the most popular introductory
neuroscience books in the world. It has been particularly gratifying
to see our book used as a catalyst for the creation of new courses in
introductory neuroscience.
NEW IN THE FOURTH EDITION
The advances in neuroscience since publication of the third edition have
been nothing short of breathtaking. The elucidation of the human genome
has lived up to its promise to “change everything” we know about
our brains. We now have insight into how neurons differ at the molecular
level, and this knowledge has been exploited to develop revolutionary
technologies to trace their connections and interrogate their functions.
The genetic basis for many neurological and psychiatric diseases has been
revealed. The methods of genetic engineering have made it possible to
create animal models to examine how genes and genetically defi ned circuits
contribute to brain function. Skin cells derived from patients have
been transformed into stem cells, and these have been transformed into
neurons that reveal how cellular functions go awry in diseases and how
the brain might be repaired. New imaging and computational methods
now put within reach the dream of creating a “wiring diagram” for the entire
brain. A goal for the fourth edition was to make these and other exciting
new developments accessible to the fi rst-time neuroscience student.
We authors are all active neuroscientists, and we want our readers to
understand the allure of brain research. A unique feature of our book is
the Path of Discovery boxes, in which famous neuroscientists tell stories
about their own research. These essays serve several purposes: to give a
fl avor of the thrill of discovery; to show the importance of hard work and
patience, as well as serendipity and intuition; to reveal the human side
of science; and to entertain and amuse. We have continued this tradition
in the fourth edition, with contributions from 26 esteemed scientists.
Included in this illustrious group are Nobel laureates Mario Capecchi,
Eric Kandel, Leon Cooper, May-Britt Moser, and Edvard Moser.
AN OVERVIEW OF THE BOOK
Neuroscience: Exploring the Brain surveys the organization and function
of the human nervous system. We present material at the cutting edge
of neuroscience in a way that is accessible to both science and nonscience
students alike. The level of the material is comparable to an introductory
college text in general biology.
The book is divided into four parts: Part I, Foundations; Part II, Sensory
and Motor Systems; Part III, The Brain and Behavior; and Part IV, The
Changing Brain. We begin Part I by introducing the modern fi eld of neuroscience
and tracing some of its historical antecedents. Then we take a close
look at the structure and function of individual neurons, how they communicate
chemically, and how these building blocks are arranged to form a
nervous system. In Part II, we go inside the brain to examine the structure
and function of the systems that serve the senses and command voluntary
movements. In Part III, we explore the neurobiology of human behavior,
including motivation, sex, emotion, sleep, language, attention, and mental
illness. Finally, in Part IV, we look at how the environment modifi es the
brain, both during development and in adult learning and memory.
The human nervous system is examined at several different scales, ranging
from the molecules that determine the functional properties of neurons
to the large systems in the brain that underlie cognition and behavior.
Many disorders of the human nervous system are introduced as the book
progresses, usually within the context of the specifi c neural system under
discussion. Indeed, many insights into the normal functions of neural systems
have come from the study of diseases that cause specifi c malfunctions
of these systems. In addition, we discuss the actions of drugs and toxins on
the brain using this information to illustrate how different brain systems
contribute to behavior and how drugs may alter brain function. 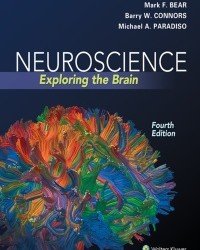