In The New Oxford Book of Literary Anecdotes, master anthologist John Gross brings together a delectable smorgasbord of literary tales, offering striking new insight into some of the most important writers in history. Many of the anecdotes here are funny, others are touching, outrageous, sinister, inspiring, or downright weird. They show writers from Chaucer to Bob Dylan acting both unpredictably and deeply in character. The range is wide—this is a book which finds room for Milton and Shakespeare, Mark Twain and Walt Whitman, Kurt Vonnegut and P. G. Wodehouse, Chinua Achebe and Salman Rushdie, James Baldwin and Tom Wolfe. It is also a book in which you can find out which great historian's face was once mistaken for a baby's bottom, which film star experienced a haunting encounter with Virginia Woolf not long before her death, and what Agatha Christie really thought of her popular character Hercule Poirot. It is in short an unrivalled collection of literary gossip offering intimate glimpses into the lives of authors ranging from Shakespeare to Philip Roth—a book not just for lovers of literature, but for anyone with a taste for the curiosities of human nature. 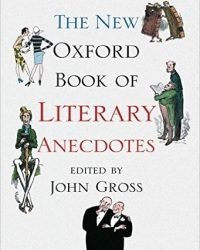